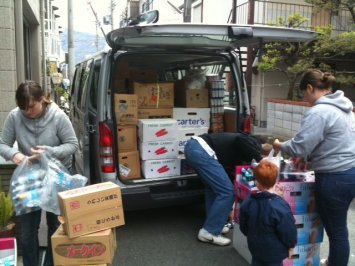 My husband Eric has returned to Sendai, working with Be One/Hope for Tohoku, which is organized by a group of house churches and missionary friends in the Osaka area.  Since the earthquake first occurred, they have worked tirelessly to coordinate relief efforts in our area.  Twice a week, they send up a truck and van load of supplies and have a great network up in the worst-hit areas for distributing these things and helping where the needs are still so great.  A local resident who was touched by the group's help offered his karate gym for all the team members to stay during their time up there.

Eric drove the twelve hours (from Osaka to Sendai) in a large rental van with two passengers up to the karate gym filled to the brim with vegetables, cup ramen, underwear and socks, portable stoves, and other necessities.  The day before he had gone shopping at costco for many of these supplies.  He said it was fine until he had to buy three large bins of women's underwear, and then he waited till no one was looking!  Here is a photo of Eric and his two traveling companions ready to leave.  More here on our blog. 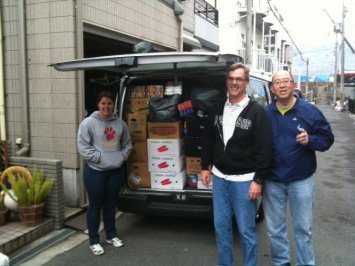 He will spend three days with the other team members distributing these goods and helping clean out homes that have been damaged and filled with debris by the earthquake.  Many of the large apartment buildings in these towns are still filled with families, despite having no water or electricity.  Can you imagine living for over a month in these conditions, with snow that is still falling?  They cannot do wash;  they do not have fuel or transportation to go out and go shopping.  We are praying that God will show the team today where the greatest needs are, as well as continue to be the ears and hands and feet of Jesus as they work, love, and listen to the many, many who still have such huge needs.

We will continue to write posts on our blog and shorter updates on Facebook.  Thank you for praying for Eric and the team; for safety and for divine encounters along the way.  Two of our other Sanda colleagues, Kent and Erik, are also up in Sendai ministering with a Japanese church.  We anticipate continued trips like this, and are tentatively planning to have a small team from our Sanda church go up during Golden Week, a week-long holiday in early May.  The needs are great;  we don't know what they are reporting still in North America but there are cases of near-starvation and rioting as people are desperate for basic food and necessities.

Thank you for your prayers.