Thank you for the outpouring of love and concern for our family during this past week. First, be assured that we are all fine. All of our Asian Access family are safe from harm. We have received word that all members of our Sendai church, as well, are safe, though our dear friend Kazue lost her home in the Arahama tsunami. (Perhaps you saw some pictures of this town on the news.)

The past seven days have been some of the most intense that we have known. Our hearts have wept at the destruction and pain of the people we love so much. Hearing numbers doesn't affect us as much as seeing one person on the news who is completely desolate, or talking to a friend on the phone who has experienced such loss. I'm sure many of you feel like this.

Many have written and asked how to give. We recommend either Asian Access’ relief fund that has been set up specifically to provide resources to our church partners and other agencies doing relief (to give to Asian Access, mark checks for Japan Tsunami Relief Fund and send to Asian Access, PO Box 200, San Dimas, CA 91773), or to give to CRASH/Japan.  There are other great organizations as well; these are the two that we know the best. Read this short list of recommended organizations for more donation options.

As many of you know, Eric and three of our missionary friends are on their way up to the Sendai area. The three of them have been asked to set up one of four or five base camps over the next two weeks in one of the hardest-hit areas. They will be able to survey the needs, the gaps, and hopefully prepare for many teams to come in and do relief work. Asian Access has linked with CRASH/Japan, a non-profit organization started by a missionary that has become the largest Christian coordinating agency during this tragedy. We shared previously that six days before the earthquake and tsunami, seven of us from Sanda (Osaka) with Asian Access attended the all-day training in order to be ready in case there was a disaster.  We marvel at God’s timing. 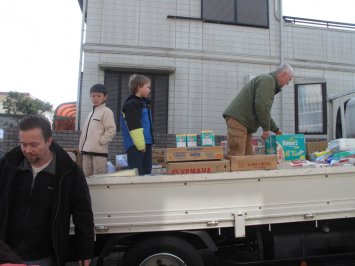 We have only had twenty-four hours to prepare Eric and the crew for this trip, and have been touched by the many from our local community who brought over needed supplies. 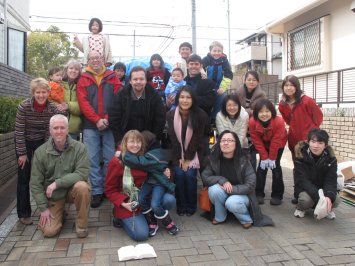 The team left Osaka to go to Tokyo and stay overnight before heading to set up a base camp. 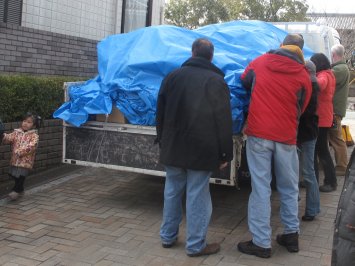 You can follow our blog or find both of us on Facebook for photos and more detailed information – I am posting often so that you, our family and friends further away, can be more aware of what is going on and how to pray.

Many have expressed concern about the problems being created by the nuclear reactors leaking. We of course are concerned as well, and thankful that CRASH and Asian Access continue monitoring the situation. It is possible that their base campsite will be changed if the situation worsens. We will keep you posted, but of course covet your prayers.

With thankfulness for your partnership,

Sue Takamoto (for Eric, too)

The guys made it to Tokyo - yeah!  They are unloading the truck and reloading gear for tomorrow morning. They had just had a briefing at the Tokyo CRASH headquarters assigning them to go to Ibaraki prefecture (the most southern part of earthquake/tsunami zone) and work on setting up a base camp.

Five minutes later, the director came in and said that Samaritan's Purse is flying in 90 tons (NINE ZERO WOW) of supplies and they are going to land at Sendai's airport. (If you saw footage of the airport you know it's a miracle that anything could land there!  The government apparently has cleared off enough of the landing strips for rescue vehicles to land). They need "all hands on deck"... and would like our guys to first go up to Sendai and unload the cargo so that it can quickly be distributed to those who need it.

First thing in Saturday morning I need to call our Sanda truck rental and see if we can extend the contract by two days - pray that they are willing.  There is a shortage of trucks and this would be a big help.  As Eric just said, all of these plans are in the hands of Jesus and they are just listening minute by minute, knowing that anything could change by the morning.  Check our blog/Facebook for updates.