SEASONS that give definition to our lives 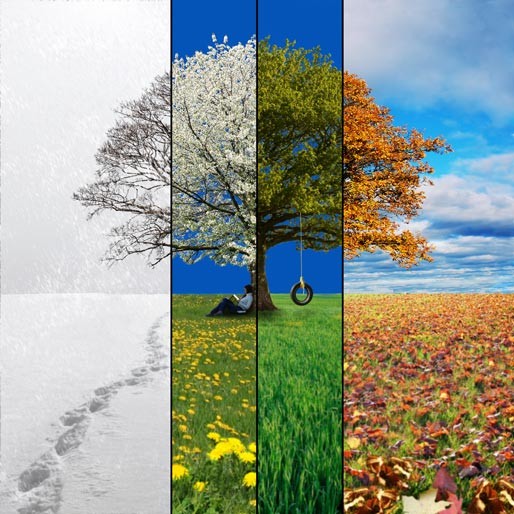 One of the most important lessons I have learnt has been to live intentionally according to the seasons of my life. It has helped me understand God’s unfolding plan for my life and to see how He is at work in various areas of my life at any particular time.

There is a liberty that accompanies the person who lives in harmony with the seasons of life. It frees a person from the need to live according to the expectations of other people or to miss God’s Kairos moments that sometimes unexpectedly break into our lives.

In his recent book, New Thinking New Future, Sam Chand opens up the idea of seasons being constantly disruptive rather than everything always being neat and tidy.

“Leaders who insist on a consistent, predictable environment value safety above progress and their goal is to avoid losing… Our task is to help our people see the benefits in the SEASONS of ambiguity when things aren’t clear, the SEASON of chaos when the end isn’t in sight, and the SEASON of doubt when they wonder if we’ve lost our minds. These are the disruptive seasons of possibility, hope and exponential growth.” (p.98)

One of the most important seasons in a leader’s life is the season of preparation. Unfortunately, many emerging leaders want to cut it short or even avoid this season before God has fully shaped and developed the person for the task He has planned for them. I am thankful for the leaders that graduated from God’s school of preparation even though the season lingered for an extended period of time.

“Don’t be afraid. Am I in the place of God? You intended to harm me, but God intended it for good to accomplish what is now being done, the saving of many lives. So then, don’t be afraid. I will provide for you and your children.” Genesis 50:19-21

The season of preparation involves developing leaders in their character and their competence and it takes a sovereign, all-knowing God to get the agenda right, even if we don’t sometimes understand what is happening.

I have never taken a class on Seasons of Life 101, but if I had to develop a curriculum, the following would be some of the issues I would want to address:

1. Life is made up of seasons.

It was the writer of Ecclesiastes who said:

“There is a time for EVERYTHING, and a SEASON for EVERY ACTIVITY under the heavens.” (Ecclesiastes 3:1)

He then proceeded to list 28 different seasons that we might experience in our lives. This would suggest that all of life is purposeful and that we need our sovereign God’s perspective to guide us successfully through life.

We are not to compare ourselves with others or resent what others might or might not experience in regard to life’s seasons. When Jesus told Peter that one day his life would painfully come to an end, Peter’s first reaction was to ask Jesus, “Lord, what about him (John)” John 21:21.

God has created you for a purpose and on your journey through life you will experience your own unique seasons. So don’t try to fit your life into a series of predetermined seasons, rather, fit the unfolding season that you face into your life.

3. There are usually identifiable seasons within various streams of life.

There are seasons of parenting from the time a child is born to the time the child matures and accepts responsibility for his/her own life.

Our goal is to understand each season and to live intentionally according to each season so that we will grow and mature to fulfill our potential in the one life that has been entrusted to us.

4. Seasons are not a life sentence.

Seasons last for a season, so don’t try and avoid a season fearing it will last for the rest of your life.

My wife Sue felt compelled to invest her life in the growth and development of our two daughters for a season to the exclusion of some other activities which were put on hold. She felt this was a season not to be missed but also knew it was a season that would one day come to an end. Interestingly, at that time, Sue discovered that there were other mothers in our street in the same season who welcomed the idea of joining in a small group gathering with their children for encouragement and sharing of ideas. In this group, Sue was able to pray for the needs of the other mothers and present a series of Christian videos on parenting. As a result, one family started attending our church. This season was such a unique and fruitful time in her life, not to be missed.

There is so much to learn from the life of Joseph. In the midst of the most difficult of trials he never compromised in his attitude to life. It is unlikely that he could clearly see God’s big picture for his life when he was sold into slavery and know that through a series of unusual events he would rise up to become the Prime Minister of Egypt. This resulted in him being in charge of the distribution of a vast supply of food at a time when a seven-year famine would impact upon the world. It was a season in his life that had been planned by his sovereign God, who brings good out of bad. He later said to his brothers,

“But God sent me ahead of you to preserve a remnant on earth and to save lives by a great deliverance. So then, it was not you who sent me here, but God.” Genesis 45:7-8

Joseph’s embracing of that season would even have consequences for our lives hundreds of years later.

6.  Some seasons may not be of our choosing.

At the age of 20, I was conscripted into the Australian Army for two years of my life that I would not have naturally chosen. However, it was only in retrospect when I was writing out a detailed timeline of my life that I could see how God used this season for good. At least two important qualities were developed in my life in the area of my leadership development. First, I learned (at times painfully) how to come under leadership, a prerequisite to being entrusted with leadership.

Second, I experienced development in the area of self-discipline which was an important element of growth in the season of leadership emergence called self-leadership. I grew to learn that I could only lead others to the extent that I have led myself.

7. A season is a defined period of time that exists for an important purpose that fits into the big picture of our lives.

The Bible has two words for time. Chronos, which relates to a measurable period of time and Kairos, which means the appointed time when God acts or the fullness of time. The seasons of our lives relate to both of these words. They occur within the confines of measured time and they are timely and purposeful.

Finally, a few suggested steps so that you might determine to live intentionally according to the seasons of your life.

I enjoy eating various fruits with my breakfast cereal each morning. However, I have realised an important cost-saving strategy as I do this, and that is to eat the fruits that are in season. It will save me money.

Similarly, we need to live intentionally according to the seasons of life and understand the purpose of each season. I have found that when I faithfully have focussed on growing in the designated areas in the season at hand, I could safely graduate to the next season.

2.  Enlist mentors along the way.

If seasons are the stepping stones along the pathway of life, then it is important to enlist mentors who have successfully walked through these seasons ahead of us and who can help us advance in our journey. Mentors are people who empower us and can be a person we meet with, or Skype with or have written a book we can read.

3.  Stay focussed on the season at hand.

Don’t race ahead of the season and don’t lag behind. Trust our sovereign God’s timing as he guides you on your life’s journey. Pass the tests of God that come with the different seasons of life that will result in God entrusting you with growing responsibility.

4.  Partner with God in every season of life.

“Very truly I tell you, the Son can do nothing by Himself; He can only do what He sees His father doing, because whatever the Father does the Son also does.” John 5:19

A close look at the gospels reveal that Jesus had a clear strategy to fulfil His mission on this earth and that this strategy was broken down into a number of seasons that can serve as a model for the church today. This strategy is brilliantly described in Robert Coleman’s classic book on discipleship, The Master Plan of Evangelism.

So, seize the season. Say yes to the things that will help you successfully embrace the purpose of the season. Follow the promptings of the Holy Spirit as you journey with the Father through each season of life. Keep the big picture in mind of which this season is a part. Don’t camp by the season and make it an end in itself. At the right time move forward into the next season that will be waiting for you.

And remember... “There is a time for everything, and a season for every activity under the heavens.”

ABOUT THE AUTHOR: Rod Denton has served as a pastor and as a teacher in the development of emerging leaders in Australia and 9 different countries across Asia with Asian Access. He now serves as a consultant for Rod Denton Equipping The Next Generation. Rod also serves part-time as the Mission's Resource Consultant with the Salvation Army.