There is much to be thankful to God for in the ministry highlights he brought our way in 2018. Below is a summary of encouraging progress from various ministry categories and missionaries serving in Japan. 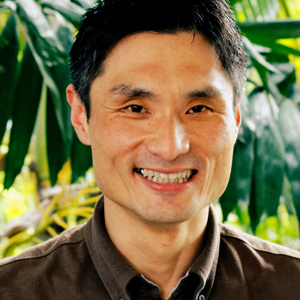 Overall, we have seen increasing momentum since the Japan Congress on Evangelism in 2016 where we sensed God confirming the target to see 50,000 churches across Japan averaging 50 people each. If this were to be reached by the time the next Congress convenes, it would result in 2% of the population following Jesus by 2023. The greatest breakthrough in 2018 has been the progress we’ve seen in mobilizing churches across Japan to reach this target. With prayerful and Spirit-led collaboration we now have a road map that marks out several layers of engagement.

The gathering in Nagoya of around 100 pastors from across Japan was significantly used to challenge leaders to equip and empower every member in making disciples.

In 2018 we launched a one-year “U30” training for a cohort of 12 pastors and missionaries to come alongside and equip these “under 30” leaders for sustained fruitfulness.

Missional Networks strategically start new churches where there is no church presence. As in other areas, this is an important piece in the northern Tohoku Missional Network’s strategy. 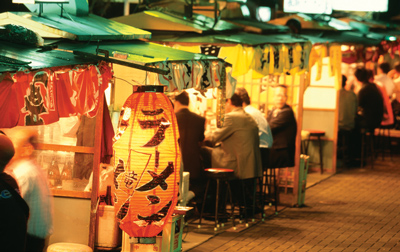 The Miyagi Mission Network (NE Japan) leaders were excited to support the launch of the Kumamoto Missional Network in Kyushu (SW Japan) in April of 2018 where seven local churches committed to reproduce, each one through starting a new church. In turn, these missional networks of local pastors in Miyagi and in Kumamoto have begun working together to support the launch of a new missional network in northern Tohoku and even exploring three new regions.

Since their arrival in March 2018, the Kidwells have been investing in Cookies, the young adult/youth group at their church. A retreat in Kagoshima provided a divine opportunity to build deeper relationships. As a result, Josh has been given opportunities to speak during Sunday School. They have seen the young people grow deeper in their faith. 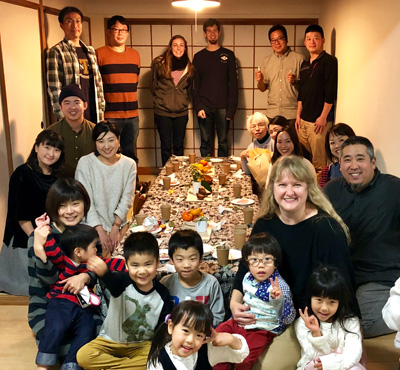 The Watanabes served as a model of American-style hospitality this past November, opening their home for Thanksgiving to a group consisting of people from four different churches, missionaries, pastors, as well as three new families with their children. This event has inspired Pastor Oda, who intends to set up a similar gathering at her church next year.

This past year, Sabrina’s ministry has shifted from language school in Tokyo to partnering with a church in Minamata in Kyushu. She has started a women’s small group and is investing in the lives of several young leaders. She is also a participant in the inaugural U30 leadership development program. It has been a challenging but rare opportunity to network and gain understanding of the vision of many emerging leaders throughout Japan.

The Adairs are part of a church plant Higashi-Shiogama. They have already seen one person come to Christ and be baptized. Robert has found it fulfilling to be a part of launching a new team of missionaries in Kyushu to partner with churches impacted by the 2016 earthquake. He is also coaching a young pastor in Kyushu who is part of the first U30 (Under 30) cohort of leaders. He loves the monthly coaching times where he can listen, ask questions, and encourage this young leader.

The Browns’ church opened a café at their campsite. The Browns are teaching English classes as a way to not only pass on English skills, but to teach about the Bible, Jesus and the gospel. God has also been drawing people to Browns’ proximity where they find a safe space to share because they are from ‘outside’ their culture. This has given them opportunities to pray with these people and share the gospel with them.

Eriko and John have seen some breakthroughs at Hokushin Calvary Church, Fukushima. A multipurpose sports court has been completed, which will give children a safe outdoor place to play. The first salvation decision has been made at the Ryozen church plant. John has also launched cell leader training at the church. Eriko’s involvement with the Sendai Hoso Choir connected their daughter to the Sendai Opera where she became a featured soloist last September. This in turn provided John with the opportunity to share the gospel with over 300 students and staff at Shokei University. 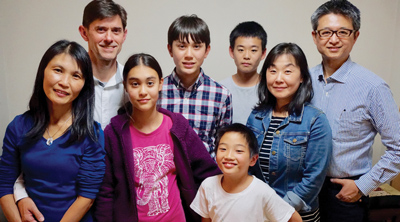 The Muhlings saw continued progress at Grace Center Church. Monthly movie nights with university students and church members sparked interest and after a series of home Bible studies, one of the students made a profession of faith. Young adults in church took on more responsibility in coordinating events with a team from Australia. Kent has stepped in during the season of transition in leadership while a long-term pastor is sought.

A highlight for Bethany has been facilitating a women's small group at Praise Community Church. Launching this has had its challenges, and the numbers fluctuate from week to week. But it is helping to fulfill the vision for the church, and the women are growing deeper in love with their heavenly Father, and deeper in love with one another. She has also been challenged through her participation in the inaugural U30 leadership development program, learning in Japanese alongside young Japanese pastors.

This past summer, the Takamoto family took a ministry trip to Cambodia. Working with Asian Access/Cambodia National Director Meng Aun Hour and his wife Rady, the family fell in love with the country and were touched by the orphanage and school for street children. The Takamotos are looking for ways to develop and strengthen a partnership between their team in Japan and their colleagues in Cambodia; one of the possibilities is a Cambodian adaptation of the Nozomi Project in Ishinomaki. Sue was also able to serve as faculty for the A2/Business forum in Korea.

The Baumans have been busy preparing for the March 2019 release of Barbara’s revised Discovering the Joy of Parenting book. This updated text will introduce a new generation of tech-savvy Japanese mothers in Japan and around the globe to Biblical parenting principles and the Author of those principles. Even as they prepare for the new edition, the original version continues to expand its influence. God has provided channels for the original text to be used with Japanese parents in Europe.

Emi has been going deeper in member care training, including being part of a Refresh Retreat summit for member care leaders from various missions in Japan. The entire Miller family has been able to connect with neighbors in their community. This includes their children, who are eager to take their Bibles to school so that they can tell their friends about Jesus.

In May, Jeffrey participated in the launch of U30 (Under 30), a leader development program designed specifically for young leaders, pastors and missionaries. Jeffery has been working alongside a new generation of national leaders to help to design and run this program. At the same time, Jeffery and Pastor Joshua Hari were invited to coach a new church multiplication initiative in Kumamoto. As a part of this, Jeffery and Robert Adair are training and supervising a team of five first-term missionaries assigned to work with three of the churches in the network.

The essence of finishing well, Dee is wrapping up her 44 years of powerful ministry in Japan. She has trained up leaders to carry on her legacy of Bible Study Ministries. One of these, Yumiko, who has been Dee’s ministry partner in small group Bible classes for several years, made the decisive step to get baptized just one month before Dee left Japan.

Continuing the Road Map in 2019 & Beyond

MOBILIZING BELIEVERS: Inspired by reports at the Vision Festival, local pastors and partnering missionaries are receiving training side by side using proven resources for equipping all believers in missional engagement.

CHURCH MULTIPLICATION STRATEGY: In February of 2019 we are bringing leaders together for 2-day intense strategic prayer and planning for Church Multiplication Networks.

VISION FESTIVAL 2019: Continuing the momentum since 2014 for local church planting and multiplication, the Vision Festival in July will include a strategic meeting of national leaders to further develop and commit to the road map toward reaching [2023 targets].

2020 TOKYO OLYMPIC YEAR OUTREACH: We are collaborating with established sports ministries in Japan to plant churches with athletes who often train on Sundays. Short-term missionaries will partner in this outreach.

RENEWED A2/JAPAN PASTOR TRAINING: Now in the planning stages for launch in April of 2020 to develop pastors who are thriving in fruitful and sustainable ministry.

7th CONGRESS ON EVANGELISM: We are looking ahead to 2023 when we gather at the 7th Japan Congress on Evangelism and report on how we have joined our hearts and worked together to see 2% of Japanese reached, and we will be ready and expectant for God to lead us even further in His work across Japan and Asia. 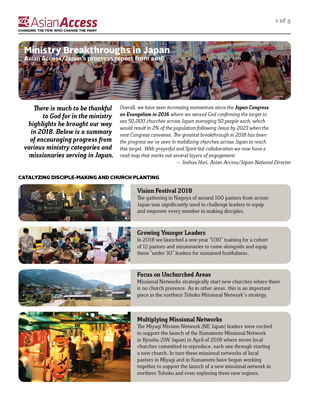